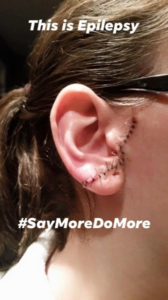 It was a Sunday.

The world we knew would no longer exist.

In a blink of an eye, anything and everything we “thought” we knew about life and especially epilepsy went out the window.

A shower…ONE simple shower, sent our lives into a spiral.

Our normal would never be normal again.

We were thrust upon a rollercoaster from hell.

Enlisted in an army of 65 million warriors worldwide, their battle was now our battle.

Epilepsy threw us into the trenches of darkness that we never knew existed.

The enemy may have marked her physically, it would be its remnants of emotional scars that would consume her thoughts, destroying any confidence she had left.

But this would not be how her story ends, she wanted to do more, say more.

Not for herself, but for the millions just like her.

This would become her anthem, our anthem.

Although we will never, ever be able to unsee, or not feel this day like it was yesterday… it gives me strength just knowing where we have been.

So many of our warriors are still battling days like this!! It hurts my heart knowing this. That’s why we still have to do more, to say more.

“If you are going through hell, keep going.”
Winston Churchill