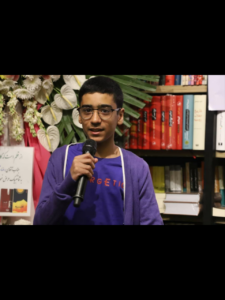 Iliya is 13. He was diagnosed with epilepsy when he was 4 years old, though old his seizures started the second day after his birth. Later we learned that birth trauma is the cause of his epilepsy and it is focal because MRI showed a gliosis on the occipital lobe Iliya’s brain.

Iliya went to a coma when he was just 10 days only and became completely unconscious at 9 months. But it was not the end.

One of the most difficult moments in Iliya’s life for us was when he was 9 years old and entered status epilepticus (SE) for five hours.

Unfortunately the doctors could not find the true problem and they diagnosed him with a metabolic disorder; after his seizures he usually had a significant drop in blood sugar. This led to an incorrect medication being prescribed.

It wasn’t until we moved to India that neurologists and epileptologists would diagnose Iliya with epilepsy and corrected his medication; Iliya stopped taking the metabolic medication and he went on anti-epileptic drugs (AED) that were more appropriate for his condition.

Even with the AEDs, Iliya’s seizures were not controlled. He was on phenobarbital, oxcarbazepine, clobazam and sodium valporate.

Following Iliya’s status epilepticus, a talented Iranian child neurologist matched the dosage of AEDs and successfully found the right combination of therapies. Since then with the help of food control – like removing bananas from Iliya’s diet – the right medications and high-fat diet has given Iliya over 4 years seizure free.

One of the key medications Iliya is taking is oxcarbazapine. Due to sanctions, it is very difficult to get this drug and it is potentially life saving for Iliya. We hope more attention can be brought to this matter to increase the availability of oxcarbazapine for all people in Iran living with epilepsy who might benefit from taking it.

It may be interesting for the Purple Day® Every Day Blog reader to know that Iliya isn’t afraid of hospitals and doctors. He is interested in the human body and very curious to know what happens to his brain when he has seizure.

He started studying human anatomy and more specifically brain function which led him to a neuroscience international competition to learn more about brain facts and functions. Daily studies neuroscience and likes to play games and interact with his little brother.

He has planned for his future and after high school – short, middle and long-term planning.

Knowing three different languages, Iliya is well suited for success and he is even learning marketing skills from his father who is a businessman. Lately Iliya has been studying in management books.

He loves his International Brain Bee books such as Brain Fact and Neuroscience which is about Neuroscience in research development.

He tries to overcome his problems. For example he studied all summer when schools were close and this helped him to solve his learning problems he had since he was born.

Today Iliya is 13 years old and studies in 8th grade. For 2 years now he is Ambassador Purple Day March 26 and Global Epilepsy Exchange to spread Epilepsy awareness around the globe. Earlier this year we joined Purple Day® Every Day as ambassadors as well to communicate epilepsy awareness not just one day a year but every day of the year.

He has many friends around the world and is honored to help them to accept epilepsy and “be friends” with their epilepsy. You can get in touch with us on social media. Our Instagram is @epilepsymyfriend.