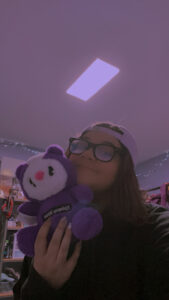 Maria Martinez is a Purple Day Every Day Ambassador and Blogger

I’m Maria. I’m fifteen years old and I have epilepsy.

My epilepsy story is something that made me stronger. And for that reason, I’m blogging because I want to make a difference and teach others how to react/respond to seizures and not only that but I want others to know that they’re not alone not at all because there are so many people that also have epilepsy.

I was twelve years old when I was first diagnosed. My first seizure was at my middle school field during lunch. I was just hanging out other my friends when all of a sudden I felt a pain in my head. I just thought to myself “It’s just a headache it will pass” and I just kept on talking to my friends.

A few minutes later everything was quiet and I saw something that tore my heart apart. It was my father burning on fire. I screamed and cried for help and everyone was just standing there asking if I was okay. I just kept crying and crying until it was over. I finally felt a relief that it was over.

After my episode the nurse toke me in most of it was a blur because of how sleepy I was. I woke up with my mom by my side and I just started crying. They thought it was just an asthma attack. After that they brought me home and ever since that episode my seizures were getting worse.

I’ve did test among tests and it showed that I have Epilepsy I was really shocked because I didn’t even know what Epilepsy was when I was first diagnosed.

A few months past and I have been taking my medication and I was doing okay but I still had seizures and not only that but I was developing depression which was a side effect on the medication I was taking – Keppra.

I was getting ready to give up. I hated myself even though I knew it wasn’t my fault.

A few days later my parents brought me to the doctor and changed my meds I was getting so much better. I felt like myself again and my seizures were getting better.

I learned to try and cope with my seizures and understand that I’m not alone.

I also learned that seizures can happen any day – literally any day of the year, anytime which is why I try my best and make every day purple day.

I feel that people should know how to react in a situation like mine and others with epilepsy — I want them to know that they are not alone like I thought I was.

Sometimes when I have a seizure I just laugh it off even if it scares me a but because I feel that if I laugh it off it makes me feel better and believe it or not it does.

Let’s face it – the holidays are approaching in a coronavirus/COVID-19 world. On holidays particularly, I don’t want to worry about having an episode and I have to imagine some of you feel the same.

On big days like a holiday or special school or work day I wake up I tell myself that everything is going to get done today. I keep that mindset so I don’t freak out. I also just keep myself distracted and just play with my younger siblings or talk with the family and embrace the day or experience in the moment and I don’t let the epilepsy worries stand in the way of that. It may be Thanksgiving, but it’s also Purple Day for me because I live with epilepsy every day of the year. Black Friday is also Purple Day for me because again, it may be a day full of awesome sales, but I still have my epilepsy to manage and so long as I am making the right choices in light of that, I’m going to be just fine.

Here’s a funny story to close this blog post out:

Me and my brother Gueddy were playing video games one day and my brother accidentally hit my head and I had a seizure. My brother was so worried and so was my mom because she was also there but when I woke up I just laughed it off because I was okay. Gueddy didn’t mean to hit my head, he didn’t mean to trigger my seizure and I don’t blame him – it was an accident. We were actually playing a scary game – every time he would get scared he would pop up and every time he would pop up he would *BAM* hit my head I woke up again laughing it off, hugging my brother and we smiled at each other laughing then we decided to never play that game EVER again. Small changes, right?