‘I Am Epileptic’ Support Group Founder Wants YOU To Join! 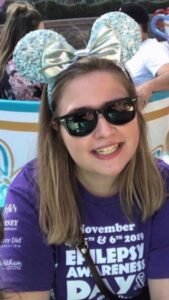 I am an admin for @iamepileptic on Facebook. It all started when I had my first seizure on March 9, 2015.

This was almost 6 years ago.

I did not realize that my epileptic seizure activity was developing. I would end up with blank stares and memory problems. All of this happened while my father was deployed to his duty station oversees.

I did not also know that things similar to AED induced rage and panic attacks could be involved.

Once I had a seizure in class. All I remember is doing a school project. I woke up to the medical professionals and my principals. We were doing experiments and all I could see was smoke and woke up with a bloody face.

I was worried that I wouldn’t perform in the musical the next week, I got support from the cast and crew and school and did not get kicked out.

For someone that does not like needles or hospitals that was scary for me. My sisters sponsor was my doctor and also a coworker of a family friend. She treated me so nicely and appreciate her !!! I’ve had about 5 seizures in my lifetime. Finally for the first time after finishing college in that week of being seizure free for two years !!! I went to the Disneyland Epilepsy Expo this year and the previous one. I feel less alone now having the support that was needed. I love reaching out to people and have been blessed to be an admin for I Am Epileptic.

Cameron Boyce was my age when he died and that’s why I advocate so much. Hopefully people can related to my story and it inspires others. Please consider joining the @iamepileptic group on Facebook and talk to me and members of my group!