Epilepsy May Affect Her Life, But It Doesn’t Determine How She Lives It! 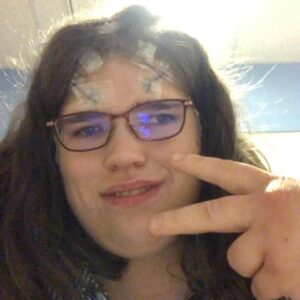 Every four minutes someone somewhere in the United States is diagnosed with epilepsy, and this is the story of how I became 1 in 26.

My name is Robyn, and I’m an epilepsy patient from Maryland, and this is my story. My story begins on the evening of December 30th, 2015. I was going into the kitchen, and then face planted between the kitchen and the family room. Apparently I had a seizure, but don’t remember anything after that. One of my parents called 911 and the next thing I remember is waking up in back of an ambulance going to the hospital. I only remember bits and pieces of being in the emergency room, so I’ll just tell you what I do remember. I remember being moved from the gurney to a bed, I remember being brought in for a CAT scan, I remember the guy that took me, and I especially remember leaving the hospital.

Fast forward to a few days later my mom was looking into neurologists, and called my granddad (her dad) for some help. Since he used to on the board at Johns Hopkins, he used some of his contacts which led us to The First Seizure Clinic at Johns. I had an MRI on January 10th, and then went to Hopkins on the 15th for an EEG and to see the doctor. I’ve had several more seizures since being diagnosed. But I do make the best of it. For example, I participate in Special Olympics Maryland and Best Buddies.

Epilepsy is a silent killer, carrying the risk of death from Sudden Unexpected Death in Epilepsy (SUDEP). It’s also the fourth most common brain disorder and yet it’s rarely ever talked about. Epilepsy talks and when it DOES talk, we just HAVE to listen.

For anyone living with epilepsy, just remember that you are not alone. And here’s a little piece of advice: Don’t be afraid to consult with your doctors or your parents or whoever is helping you with your illness. It’s the best way to get help! Just never be afraid to talk with other people and ask for their opinions or their help. You never know what you can learn. Always remember: It whispers, so listen.

Epilepsy may affect my life, but it doesn’t get to determine how I live it. I do!