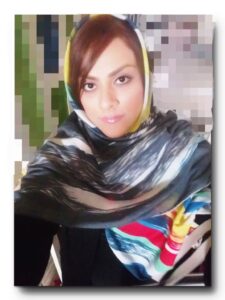 Though I don’t remember much from that time but I had absence seizures.

I visited different doctors in Ahvazz, Isfahan and Tehran. All of them were asking EEG and all told that my EEG is normal and you will be fine gradually when you grow up. None of them could find the right diagnosis and they didn’t find what was the cause of my seizures.

I took different medication but I was drug resistant.

Unfortunately, I grew up in a place where people had no more information about Epilepsy and it was scary for them and their reaction was annoying me.

I was smart student. The year I was sick and had frequently seizures I could finish grade 2 and 3 together.

The people around me were blaming that you will not be able to finish the school and it was irritating to hear that.

I never gave up and I didn’t let myself to go through depression mood.

I always wanted to prove that I am a normal girl as I was before and I am strong enough to continue studying and be successful.

I had few seizures during middle and high school which were absence with semiconscious.

Thankfully I could finish high school. I chose mathematics to continue in university, but as usual I was objected by people surrounded me.

They told me that I cant be successful and I should change my field of study to easy one.

However, I didn’t care much and I followed my dreams. Finally I graduated masters degree in mathematics.

I am happy today I proved them wrong.

Sometimes I think it was epilepsy contributed to be successful in my education.

As I grew up, I experienced severe seizures. I noticed some food was not good for me and I removed them from my diet.

3 years back I had seizure with Aura which I didn’t have before. It made me very restless.

On that times I had 8 seizures in a month and had to admit in the hospital. I had rough time with severe seizures.

Suddenly I met a person through internet who had epilepsy surgery by success. He introduced me to Dr. Asadipouya a talented epileptologist who diagnosed the right treatment after 24 years.

Doing LTM and MRI, I was told tat there is spot less than half a millimeter on the right temporal lob where happened during my birth.

He suggested brain surgery and I did it two years ago in a hospital in Shiraz. The surgery was successful and hopefully its two years that I am seizure free, although I am on Kepra and Tegretol.

My doctor said the AED will be reduced slowly.

I would like to thank my parents who supported me all these years and specially doctor Asadi poya and the angel I met in social media.