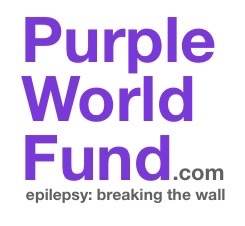 I am epileptic since 34 yrs, have partial seizures.

I am at Lions International Club- District 351 ( Lebanon, Jordan and Iraq). The Club’s name is Beirut Bay LC( BBLC) since 2010. Facebook page: Beirut Bay Lions Club
We had launched the ” Epilepsy  Committee Awareness ” at Lions on 2013. I was the Chairperson Committee District. and the President of BBLC on 2014 and till present.

– Awareness session on Epilepsy, on November 27th 2013, at Phoenicia Hotel. It was sponsored by a bank. The lecturer was Prof Youssef Comeir at Clemenceau Medical Center ( CMC).

Based on the success we made, I had established a Fund “ Purple world Fund: breaking the wall” to spread awareness on Epilepsy and to support epileptic financially to change their quality of life.
About PWF
PWF was founded on 2013, and the founders are :  Ex-Minister of Interior Mr. Ziad Baroud, Dr. Riad Tabbara ( economist, researcher was the Economic Counselor for the Prime Minister Mr. Rafic Hariri), Mrs Najwa Alameddine ( Hearing aid specialist) and Mr. Mosbah Majzoub ( Audit).

The Advisory Board is: Prof. Ahmad Baydoun, Neurologue and prof. Marwan Najjar, Neurosurgeon at AUBMC. Please note that We are working closely with AUBMC.

Bearing in mind, that Beirut Bay Lions Clubs, The District Committee headed by me  and PWF are working together to spread awareness on epilepsy.

( We have in Lebanon 120 Clubs in all districts)

First – 5 Awareness sessions ( What is Epilepsy, Causes, treatment and how to deal with someone has a seizure First aid)

Venue: AUBMC, Universities, all districts  in cooperation with Lions Clubs.

Lecturer: Prof Marwan Najjar and in cooperation with the Lebanese red Cross

Second – Pampering the Epileptic ( in cooperation with a Spa, we will host epileptic for massage etc. to pamper them)

Third – To do Operation for Mr. Azzam who is in need.

We identify the person based on the applications and social study made by AUBMC. Then we visit the home to see the reality. Azzam has 30 yrs, doesn’t work had generalized epilepsy.

To organize an awareness session in the university.

This year we should fund raise $14 000  to do the operation for Azzam.